Communications, and Why It’s Vital For Today’s Nonviolent Campaigns and Movements 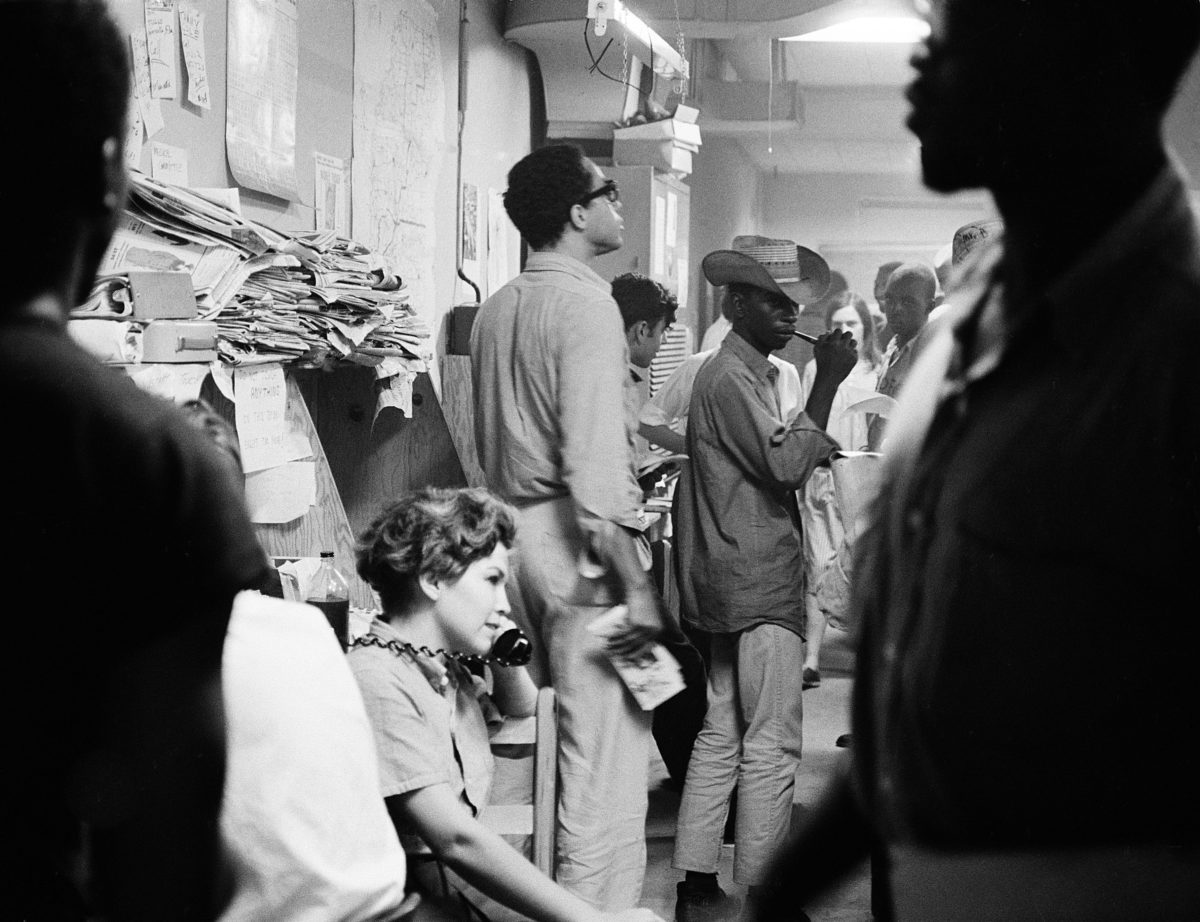 Despite the tumult in Mississippi Freedom Summer’s 1964 Jackson headquarters, the function of communications was ongoing and sometimes life-saving. On most days, Mary King was working to break news stories, or speaking with reporters as seen here. © George Ballis

Nonviolent campaigns usually seize the latest technologies available, perhaps leading some organizers mistakenly to think that e-mail blasts produce effective civil resistance. Yet communications is a larger, more comprehensive component for effective nonviolent action, possessing kaleidoscopic capacities. For impact, it must grasp the most effective techniques developed over past decades, particularly if mobilized public opinion and national or transnational awareness are at stake.

Winning good coverage from a fractured news industry can be fundamental to realizing tangible social change. The virtue of the cause is insufficient. News media owe nothing to a campaign or movement, no matter how noble its intentions or dishonorable its adversaries.

Nonetheless, basic communications functions—including getting out news reports that are being suppressed, ignored, or twisted—can result in being formally accused by a state prosecuting authority seeking a grand jury’s indictment.

I learned about the potency of communications firsthand in May 1963, when demonstrations were underway in Danville, Virginia, where African Americans—one-third of Danville’s population—suffered disenfranchisement, stifling segregation and pernicious poverty. For nearly a week, demonstrators rallied daily at local government offices, demanding that the city hire African Americans as firefighters, police, meter readers, secretaries, and clerks. After 200 were arrested for violating an improvised injunction, and two of Danville’s pastors were indicted by a grand jury for “inciting to riot,” local leaders urgently called on the Student Nonviolent Coordinating Committee (SNCC), in Atlanta, for help.

Danville’s fully energized black citizens would soon have the support of 14 SNCC field secretaries, six lawyers, and me. Along with SNCC Press Secretary Julian Bond, I was part of a South-wide system of gathering information from field secretaries or volunteers in local offices. Their flow of accounts enabled us to share timely news dispatches to journalists. For four years, often seven days a week, I pushed news reports onto national media circuits, expediting the ability of journalists to cover a complex mass movement. We published bulletins, special reports, and took sworn affidavits, while creating an elaborate system to transmit items onto wire services. By 1964, we had a dozen professional photographers spread across the South. With our own offset press, we printed a weekly newspaper reaching every donor, The Student Voice. We tape-recorded “actualities” for radio stations on-site, especially black-owned broadcasters, to go on air immediately. I deployed this system soon after arriving in Danville.

On June 10, police officers snaked huge coils of firehoses onto the city hall steps. As the disciplined marchers walked with dignity, police turned firehoses onto them and beat them with clubs. With three high-pressure firehoses aiming at demonstrators only 15 feet from their faces, able to rip off clothing, break bones, puncture skin, fracture skulls, and enucleate eyeballs, 48 of the 65 demonstrators were injured and treated at a hospital. Meanwhile police cars gyrated, state troopers arrogantly patrolled, fire trucks careened, and helicopters clattered. At nightfall, a riot tank with four mounted machine guns and police using submachine guns at roadblocks impeded access to the mass meeting in a church.

With my trusty typewriter, I fired off more dispatches to both local and national media outlets, phoning reliable reporters directly.

In mid-summer, movement lawyer Len Holt rushed to my desk, warning that a grand jury was about to indict me for inciting to acts of violence and war. An old Virginia statute held it illegal “to incite the colored population to acts of violence and war against the white population,”—a decree passed after the 1831 Nat Turner slave uprising in Southampton County, Virginia. It was also the basis along with treason for hanging John Brown after the 1859 Harper’s Ferry raid.

Warning that I could have no lawyer at the grand jury, where the presiding judge wore a pistol at his waist, Len found a local leader to drive me across the Dan River. As the grand jury was indicting me for “inciting to acts of violence and war,” I crouched on the car’s floor, crossing into North Carolina, where a Roman Catholic convent protected me until I could return to Atlanta.

Why Communications are Essential to Movement Success

The abstract technical label “communications” fails to express its significance and why it’s vital for today’s campaigns and movements.

The flow of dependable communications amplified the larger aims of our direct action, the organizing of voter registration drives, and development of alternative institutions such as freedom schools.

Communications also provided limited forms of protection. Sometimes the only safeguard was asking a reporter to visit a jail and inquire of the sheriff as to whether an individual was behind bars. This might be the sole defense available for a local change agent against brutal attacks.

Adroit communications can illuminate local authorities’ indifference and inaction, disclose forces acting in collusion, and divulge discrepancies between the stated values of the adversary and its failure to act responsibly. Dependable information is of immeasurable and irreplaceable value.