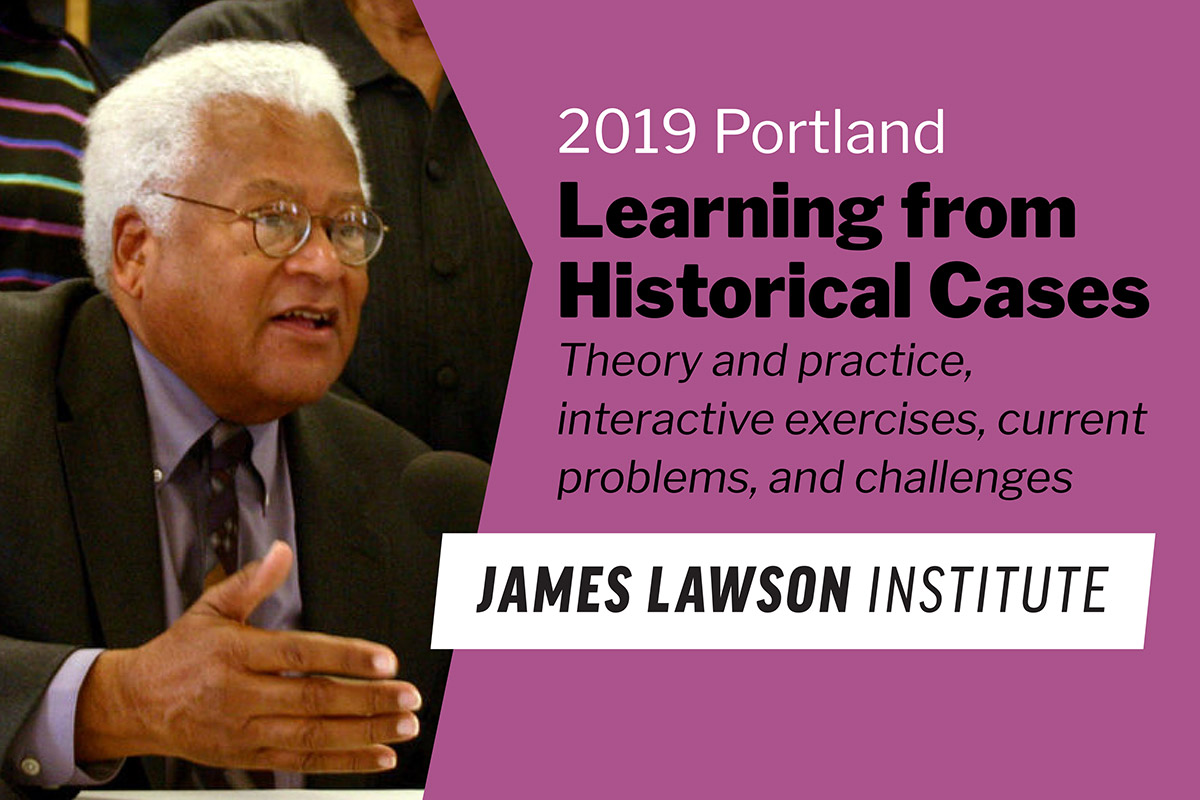 As a small nonprofit teaching institute, the Lawson Institute sponsors periodic learning opportunities for individuals who are already involved in contemporary nonviolent struggles in the United States or have purpose and reason to learn its theories and methods.

The term “nonviolent action” is one of the many English-language terms coined by Mohandas K. Gandhi that we use today, referring to what he called a method, process, or technique of struggle. The phenomenon of nonviolent struggle goes back to the ancient world and has been found wherever researchers have searched for it. It is not “the opposite of violence.” It uses a form of power that is universal, sometimes called social power, referring to influences and pressures that can be applied by groups to achieve objectives. It is also called “nonviolent direct action”, because it does not rely on officials, agencies, representatives, or standard institutions of government or politics; instead it takes the group action directly to the cause of the distress or oppression.

The Preamble to the 1776 United States Declaration of Independence holds that governments obtain “their just powers from the consent of the governed.” In other words, the people’s power can be withdrawn. Nonviolent struggles seeking justice and relief from oppression have time and again relied on “noncooperation” with the source of the wrong in organizing the withdrawing of cooperation and obedience. Withholding the “consent” cited in the Preamble is often at the core of nonviolent resistance.

The Lawson Institute periodically assembles scholar practitioners, leaders, organizers, and activists who are committed to pursuing their goals through nonviolent action to study and practice together. With Dr. Lawson’s close involvement, JLI is a unique setting where one can learn the history, theories, and practice of nonviolent action, including the basics of strategy, tactics, and method. It is not, however, an educational environment for debating violence and nonviolence. JLI convenings focus on knowledge and effective application of nonviolent civil resistance.

Apply for the 2019 Portland Institute

The public is invited to a talk by the Reverend Dr. Lawson at 6 p.m. Wednesday, April 24, at the Portland State University University Place Hotel Columbia Ballroom, 310 SW Lincoln St, Portland, OR 97201. This talk and the panel following it are in partnership between the James Lawson Institute and Students United for Nonviolence (SUN).

JLI is a continuation of the work that the Reverend Dr. James M. Lawson led in the late 1950s and 1960s with groups such as SCLC and SNCC. It is an effort to encourage that type of strategic work again.
As secretary of the Fellowship of Reconciliation, working with the Reverend Martin Luther King, Jr., he traveled throughout the southeastern United States, sharing accounts of how the Montgomery bus boycott and the Little Rock Nine succeeded as models for how nonviolent action can produce tangible results despite the impediments of oppressive policies and discriminatory laws.

Deciding that preparations should be made for another major campaign of nonviolent struggle, to be organized through a strategic process, in early autumn 1959 in Nashville, he, Lawson began teaching some 16 weekly workshops. Each was two-to-three hours long for students from all of the city’s institutions of higher learning. The Nashville undertaking would become a central campaign of the U.S. freedom movement, nurturing organizers and nonviolent practitioners for the next decade, helping to establish and develop both SCLC and SNCC, and producing such leaders as John Lewis, Diane Nash, and Pauline Knight. Mention 1 or 2 others?

JLI is a deliberate effort to demonstrate that nonviolent campaigns can be organized from the grass roots as they were in Montgomery, Nashville, and Little Rock.
JLI today seeks to strengthen and prepare individuals, groups, and alliances for building effective campaigns and drives of nonviolent direct action aimed at 21st century injustices.

Goal 1: JLI seeks to recover some of the historical perspective of the 1960s freedom movement to promote an understanding of historical and present-day cases of nonviolent struggles. Historical evaluations, including Gandhi’s interventions of the 20th century, helps to throw light on conditions in today’s society (such as racism, sexism, poverty, militarism, environmental degradation, and plantation capitalism), which demand to be addressed and may with the planning and preparation that we offer be responsive to nonviolent action campaigns.

Goal 2: To strengthen and share insights, current research findings, new knowledge, and practical interactive applications for what both Gandhi and Dr King called the “operative technique” of nonviolent resistance.

Goal 3: To prepare nonviolent practitioners with the background and simulation needed to create wise strategies and sound communications, including language appropriate for what Dr. Lawson calls the “new emerging society.” 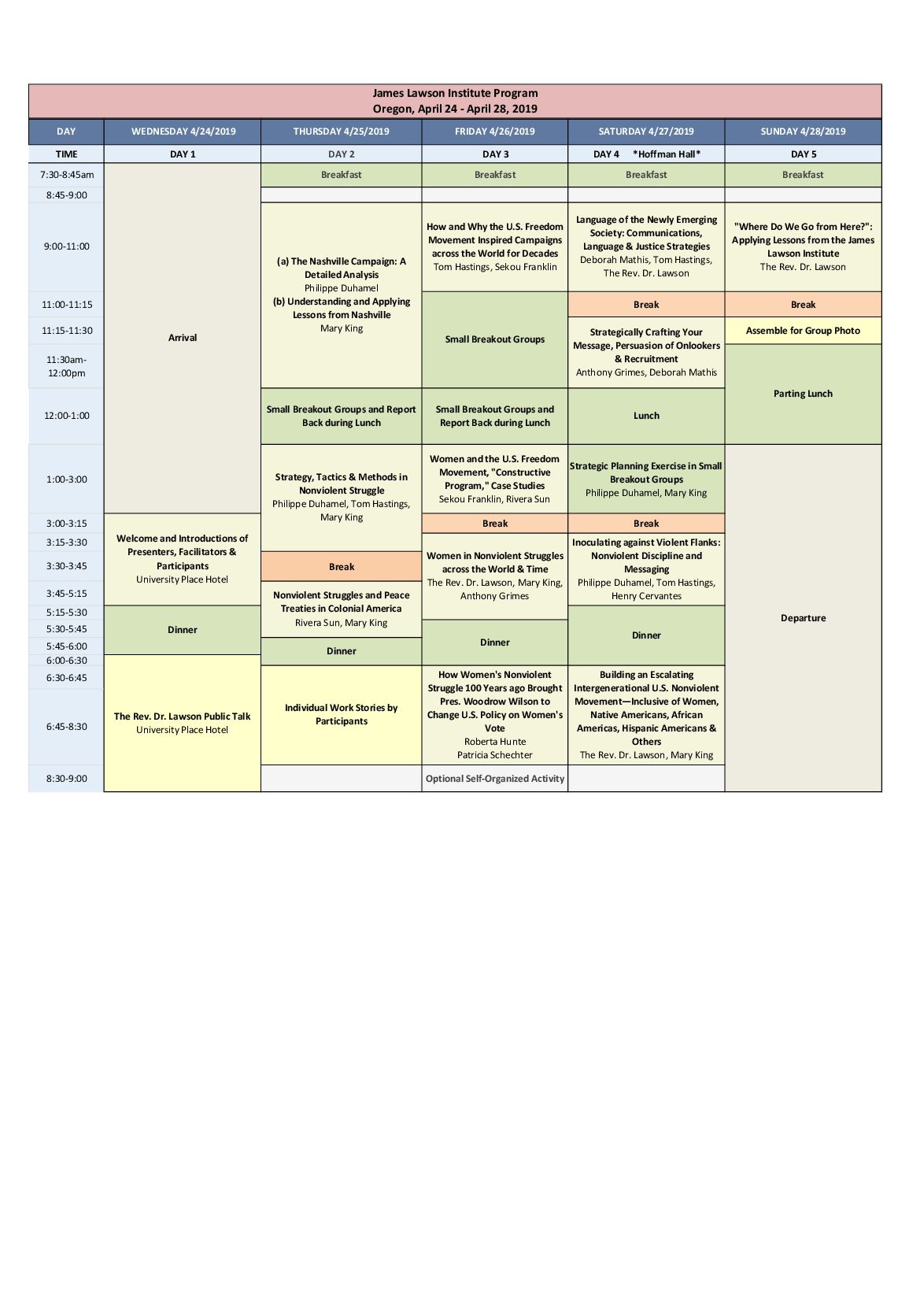