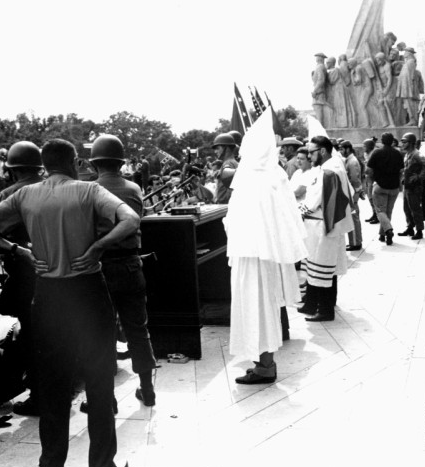 Black History Month has many meanings. For me, it is a time to remember the tremendous contribution African Americans have made to the building of the United States—as much as any group, and possibly more. I mean this literally, as in constructing so much of the nation’s material infrastructure, but I also am speaking of another realm.

The U.S. Department of Commerce reported 4,733 lynchings between 1882 and 1962, nationwide. Of these, three-quarters of the victims were black, mostly in the Deep South, and we may assume that the incidents were underreported. Among the greatest contributions of the civil rights movement to the United States was its participants’ willingness to confront a culture beset by violent racism and pervasive fear. Random acts of violence could occur at any moment, with no expectation that police would intervene. It is easy to overlook today, especially considering the ways in which insidious racism continues, how great a distance has been traversed.

The measures used against us in the Student Nonviolent Coordinating Committee (SNCC) to provoke fear included cattle prods, shootings into homes and churches, bombings, and the administration of preposterous, systematized obstacles to voting. Anything that could be done to arouse fear was done: arrests, harassments, harsh reprisals, jailhouse beatings. Three of my fellow workers were murdered in Mississippi in 1964 by law officers.

In the interim between college and seminary, my father had been voter registrar in a rural Virginia county in the 1930s and told me that the form he had to administer was essentially blank. Hence there was no objectively correct way for a would-be voter to become registered to vote—it was at the discretion of the registrar. This was common across the South.

What is often forgotten is that the intimidation and fear of reprisal affected the white community too. I remember the entire state of Mississippi as being frightened and bullied by the Ku Klux Klan, vigilante groups, and by state-sponsored and -condoned terror organizations, often operating with the complicit support of local law enforcement agencies. The state seemed conformist, silent and fearful. The only white Mississippians that I recall ever attending a SNCC staff meeting were Malva and Red Hefner, who were run out of McComb for inviting white civil-rights workers into their home. (Their daughter is the writer Carla Carlisle, who in her flight from Mississippi headed for the Sorbonne and has since lived in Britain for most of her adult life.)

How did we in SNCC overcome fear? As I have written elsewhere, field secretaries went into plantations around Indianola, Sunflower and Ruleville, but not before dusk. In the fading rays of light, they approached uninsulated tenant cabins and went from door to door, politely asking if they could sit and talk about registering to vote. Many sharecroppers were too frightened to admit them to their cabins. This prolonged organizing required that they first develop trust, and then build confidence. The work was ethically heavy: no field secretary could urge sharecropping families to take the risks of registering to vote without appreciating that as a consequence they might be driven from the plantation with nowhere to go, lacking housing and food, having no job, and left with what amounted to only our insubstantial moral support.

Undertaking nonviolent action does not place anyone or any campaign on a high ground or exempt them from attack. As Christopher A. Miller notes in the section “Arrests, Injuries, or Worse,” from Strategic Nonviolent Struggle: A Training Manual, potential participants need to be made aware of possible dangers. When people become persuaded that passivity and submission are no longer acceptable and that action is necessary, it is important not to force or coerce individuals into taking part. Risks should never be understated.

Once participants are made aware of the hazards, those who are dedicated are likely to stay so, and unity within the group often increases. Knowing what you may encounter and what to do if arrested is crucial in addressing fear. We held workshops and brought in lawyers who gave both staff and local people familiarity with how the actual process of arrest proceeds step by step, how police systems operate, what it is like in jail, and what rights and entitlements can be sought. As the various steps were detailed, elements of fear begin to subside. The more one knows, the less fearful is the prospect of being arrested for your cause. We also play-acted the procedures. Virtually every session involved robust singing, part of combating dread. Music is an antidote to fear too, as I have written before.

Awareness cannot be detached from strategy, in the sense that real-life preparation needs to coincide with the tactics that have already been chosen and planned. Lists should be prepared in advance of contact persons for those expected to be in the path of arrests. No individual should be functioning alone, and tiers of others need to be prepared to support those locked up through the monitoring of police stations, acting as witnesses, or by taking notes at key facilities. Potential psychological side effects of trauma need discussion, including arrangements for violence or rape counseling. Cases of arrests or casualties always need documentation. The ability to notify families should be planned. Evidence ought to be gathered to fight wrongful imprisonment or prove the injurious behavior of an opponent or group.

Today, as never before, the use of cameras and mobile telephones by witnesses and monitors can convey the message that the police or security forces are under scrutiny and that attention will be brought to any harsh or brutal practices. If participants may be attacked, ensure that they wear white or light colors so that the results of an assault appear clearly on television and in photos. The viciousness of an opponent can and should be exploited as one of its weaknesses. Documentation of cruel reprisals may help to delegitimize an opponent and potentially undermine its backing.

I remember being taught how to roll into a fetal position to protect my vital organs and the vulnerable junction between my neck and the base of my head. Training and preparation pursuant to strategy can minimize injuries. People need to learn how to handle tear gas. In preparing for injuries, trained medics should be on hand if violent reprisals are anticipated or large numbers of people will be gathering. Medical supplies and water need to be available.

SNCC workers always carried a toothbrush in a pocket, and chapstick. Something this simple can help to deflate fear. The toothbrush connoted readiness for being locked up and the acceptance of penalties—which is at the core of noncooperation and civil disobedience—and since all of us did this it also signified that we were bonded together.

How does one think strategically after suffering serious trauma at the hands of police, with no time for rest or recovery? According to Gene Sharp,

“To think strategically” means to calculate how to act realistically in ways that change the situation so that achievement of the desired goal becomes more possible. This is very different from simply asserting its desirability or declaring opposition to the current system.

Once enmeshed in a protester-police dynamic, it becomes very difficult to think strategically. I learned the hard way that the moment when I became afraid was no time for analysis. Trepidation compromises one’s ability to evaluate the best progression of actions and sub-strategies for a grand strategy; fear impedes the ability to think through interlinked campaigns. When a group prepares together and has familiarized itself with what may come, this grounding will bring about a subsidence of fear. The intensity of the discussions also helps the group to nourish itself, in reviewing its goals and aspirations, and such a review produces recommitment.

When you are frightened, it is not possible to plan how to counteract the adversary’s actions. This is because all physiological resources are mobilized for survival, including the so-called fight or flight response. Your system is flooded with adrenalin and blood is directed toward the muscles, and away from the brain. Your mind is entirely geared to ensuring your survival, with little room for analytical thought. Rather, the planning for the sequencing of nonviolent methods of sub-campaigns in the pursuit of long-term goals must take place under calmer circumstances, isolated from direct encounters of any sort.

Weakening the grip of fear can benefit everyone embarking on nonviolent action. After the struggle is over, onlookers often comment in amazement at how brave and courageous were the civil resisters. The full story is always more complex. Yet Black History Month reminds us, in case anyone has forgotten, that the interracial civil rights movement has taught how it is possible to prepare to stand in the face of fear.